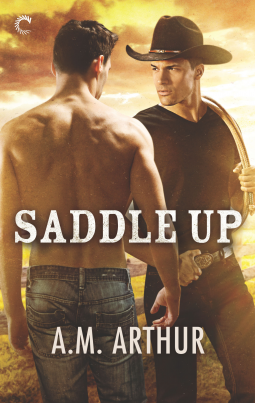 I should apologize becuase I totally dropped the ball on this.  I thought the book didn’t release until next week.

Reyes Caldero keeps his past buried deep and his emotions buried deeper. But what he doesn’t say he always makes up for with his actions. When the hot chef he once saved from an abusive ex turns up at Clean Slate Ranch, the quiet cowboy is happy to act on their sizzling chemistry, even if he’s not ready to share his secrets—or his heart.

Miles Arlington needs to get the hell out of San Francisco, and heading north for a job near Clean Slate Ranch seems like just the thing. It doesn’t hurt that his secret crush slash onetime rescuer happens to work at the ranch. Miles has never been one for the outdoors, but the superhot Reyes has him ready to saddle up.

Reyes is happy to keep things casual, even though his heart has other ideas. And when Miles is forced to confront his past again, Reyes and Miles will have to put all their trust in each other if they want any chance at building a future together.

Cowboys are my thing.  Seriously.  I don’t know if I watched too many westerns as a kid or because I grew up in what was once the Old West, but it’s true.  So, when I spotted Saddle Up, I had to read it.  Bonus: Miles is a chef, something else that interests me.

Miles was probably my favorite of the two main characters.  I could relate a lot to his love of cooking and turning it into a career by accident.  Not that that’s how my life went but because it was what I had once wanted to do.  He has a rough past and is desperate for a new start.  And if that new start happens to have the sexy cowboy Reyes Caldero in it?  All the better.  Miles is charming and strong, even when he doesn’t think he is.  That he’s able to cope with everything happening around him is amazing.

Reyes really is the perfect match for Miles.  He’s older, more experienced, and has dealt with his own catastrophes, giving him unique insight into how to help Miles get through his own.  That, and having experienced first hand the reason why Miles is fleeing his home for Clean Slate, he’s already aware of part of Miles’ troubles.

The interactions between Miles and Reyes were sweet and fun and it’s obvious that they care for each other, even if neither is willing to make that first move.  But that’s okay, I prefer my romances that way.  Take that time to get to know each other before you land in bed.  The thing that bothered me were the secrets each man was holding onto.  Miles not telling Reyes makes some sense because he was running for his life, essentially.  It was real and present and current.  However, Reyes holding on to his secret, beating himself up over it, and declaring himself unfit to be loved was rather annoying.  He’d been a frightened kid when it happened and had no control over what had occurred.  I do undestand why he was worried, why he carried that guilt, but I do not understand why it made him push Miles away like he did.  That said, I loved the entire premise of the story.  The ghost town reminded me so much of my visit to Tombstone, AZ, that I felt like I was there.  I hadn’t realized there were two other books in this series.  Now, I need to pick them both up to find out how Mack and Wes got together.

*thank you to Netgalley, the publisher, and the author for an advance copy of the book in exchange for a fair review.