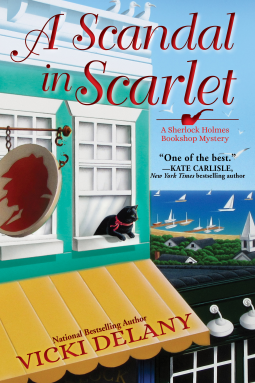 Walking her dog Violet late one night, Gemma Doyle, owner of the Sherlock Holmes Bookshop, acts quickly when she smells smoke outside the West London Museum. Fortunately no one is inside, but it’s too late to save the museum’s priceless collection of furniture, and damage to the historic house is extensive. Baker Street’s shop owners come together to hold an afternoon auction tea to raise funds to rebuild, and Great Uncle Arthur Doyle offers a signed first edition of The Valley of Fear.

Cape Cod’s cognoscenti files into Mrs. Hudson’s Tea Room, owned by Gemma’s best friend, Jayne Wilson. Excitement fills the air (along with the aromas of Jayne’s delightful scones, of course). But the auction never happens. Before the gavel can fall, museum board chair Kathy Lamb is found dead in the back room. Wrapped tightly around her neck is a long rope of decorative knotted tea cups—a gift item that Jayne sells at Mrs. Hudson’s. Gemma’s boyfriend in blue, Ryan Ashburton, arrives on the scene with Detective Louise Estrada. But the suspect list is long, and the case far from elementary. Does Kathy’s killing have any relation to a mysterious death of seven years ago?

Gemma has no intention of getting involved in the investigation, but when fellow shopkeeper Maureen finds herself the prime suspect she begs Gemma for her help. Ryan knows Gemma’s methods and he isn’t happy when she gets entangled in another mystery. But with so many suspects and so few clues, her deductive prowess will prove invaluable in A Scandal in Scarlet, Vicki Delany’s shrewdly plotted fourth Sherlock Holmes Bookshop mystery.

My first introduction to this series was by an online mystery reading group earlier this year.  Although I hate not starting a series at the beginning, the book they were buddy reading was Body on Baker Street, the second in the series.  I figured that was close enough to the beginning that I wouldn’t be too lost so I dove in.  I am so happy I took that chance.

As much as I enjoyed that first book, Gemma Doyle annoyed me quite often.  I liked her, but I didn’t, if that makes any sense.  However, since the story had been a good one, I moved on to the next in the series, The Cat of the Baskervilles.  I was pleasantly surprised with the character development Gemma experienced in that third novel.  This fourth novel, Scandal in Scarlet, gives Gemma even more needed character development plus a good dose of self-awareness.  She’s still very much Gemma, but takes the time to think about things before she says them.  Gemma finds herself saying, “Jayne tells me…” quite often, which made me happy because she was finally taking her friend’s cautioning words and adapting them into her actions.  Now, she doesn’t always do what Jayne suggests, but she’s not being as abrasive and annoying as she was in earlier books.

The mystery portion of this novel was also stepped up as well, giving us a lot more to think about as we move through the story.  Gemma, for once, is willing to listen to Ryan and not get involved, but Maureen from the shop across the street, doesn’t give her much choice in the matter.  It was fun seeing Gemma stumped as far as who the culprit was.  Too many suspects and not enough information kept her from putting it all together until the last minute.  Even when I like a character, it’s good to see them stumbling and doubting themselves on occasion. Of course, you don’t want them to be like this all the time, but in Gemma’s case, it was time.  She’s always so self-assured and confident that she’s right that it could get annoying.  This case was a bit humbling for her, even if she did figure it all out in the end – plus an added bonus at the very end.

For me, this has been the best book in the series to date.  I’m happy that Gemma and Ryan are working things out and trying to have a relationship again.  I think that them being together gives her a reason to try harder.  Also, he’s kinda loveable, right?  In future books, I hope we get to know more about Grant and Donald because they both interest me.  Oh, and please let Jayne find a boyfriend worth her effort so Gemma can leave that alone as well.  Although I know she means well, she’s driving Jayne nuts.

Whether you’re a Sherlockian or not (I am), this is a fun little series full of exciting and engaging characters and well-written mysteries.  For me, there’s always the added bonus of Gemma’s book recs as well as her allusions to older Sherlock-related television shows and movies I’ve never heard of before.  If that’s not your thing, then sit back and enjoy Gemma and Jayne getting themselves into trouble all for the sake of solving the mystery.

Thanks to Netgalley, the author, and the publisher for an advanced copy in exchange for an honest review.

2 thoughts on “Review: A Scandal in Scarlet by Vicki Delany”