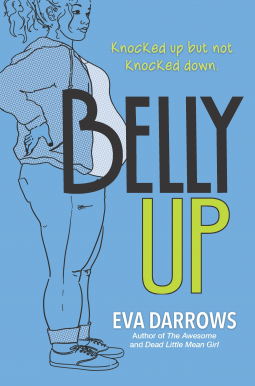 Juggling the realities of a pregnancy with school and a new relationship are hard enough, but when Jack, the father of her baby, turns back up, Sara’s life goes from complicated to a complete mess. With the help of her overbearing mother and grandmother, Sara will learn to navigate life’s challenges and be ready for anything, as she prepares for the birth of her baby.

Teenaged pregnancy is a fact of life.  Like it or not, it happens, which is why I picked up this book.  Being a mother to two teen girls – one 17 and other 19 – I thought it’d be an interesting read and I wasn’t wrong.

Sara is a breath of sarcastic fresh air.  Her voice is fresh and real, even in the moments when she’s putting up a front because she’s scared half to death.  She’s also very mature, never once blaming her mistakes on anyone other than herself.  It helps that her mother was also a young, single parent, so she didn’t risk the judgement that so many parents hand down to their kids in these situations.  Instead, Astrid encourages Sara to embrace the moment and live up to her potential, baby and all.

Belly Up covers all the issues surrounding teen pregnancies, the realities you face, as well as how horrifying being pregnant can be.  Those were some of my favorite parts, I have to admit.  Sara turning into a bottomless pit once her morning sickness eases up.  All the bizarre changes in your body.  It was glorious how horrified she was, but hopeful in the way she took it all in stride.

In addition to teen pregnancy, Belly Up also touches on issues of gender identity, sexual identity, and racism.  None of this is hit on too hard, but it is presented in a way that you take note of it.  I enjoyed the way Sara refused to call her unborn baby it and instead used genderless pronouns (them for the most part).  It was a different sort of way to handle the whole MY BABY’S NOT AN IT thing that I went through.

Hands down, for me the best character was Leaf.  He’s cute, he’s sweet, he’s this big teddy bear of a boy AND HE’S ROMANI.  Now, side note here: I fell in love with all things Romanian at a young age.  Why?  I’m not sure, but it probably had a lot to do with my Dracula obsession.  Anyway, since Romania has probably the largest population of Romani people, it was inevitable that I’d eventually fall in love with that culture as well.  Hearing that Leaf is Rom made my day.  Even more amazing was that the author actually took time to research the people themselves and dropped tidbits about their culture so that Sara could learn from Leaf about his heritage.

The only thing that bugged me was the addition of this new trend of adding a question mark at the end of a statement.  Things like, “He’s a jerk but I love him?”.  I get where the intent comes from – you’re making a statement you’re not one hundred percent sure about.  Maybe I’m old, but it throws me off every time.

Belly Up is the kind of book that bridges the gap between adults and young adults.  Although both of my kids are around the same age as Sara, I still thoroughly enjoyed her story.  Part of it might be because so many of my friends had babies in high school, but most of it is due to Sara herself.  She’s fun, she’s vibrant, and she has an amazing support group to help her through one of the toughest times of her life.  Being a teen mom isn’t the end of the world by any stretch of the imagination.  The key is to surround yourself with the right people.  Good friends like Devi, Erin, and Morgan.  A great boyfriend like Leaf.  Never mind her amazing mom and grandmother.  An excellent book no matter your age.

*Thanks to Netgalley, the author, and the publisher for a copy of this book.