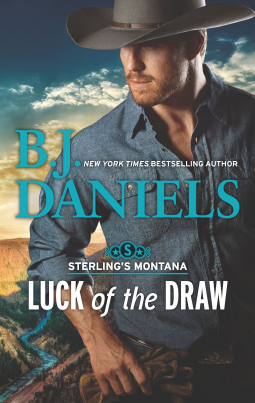 He may get a second chance at his one true love–if someone doesn’t kill her first. When Garrett Sterling leaves for a horseback ride through his family’s sprawling Montana property, he’s expecting a relaxing break from the construction at the Sterling guest ranch. What he gets is something far more sinister. It all happened so fast that it’s hard for Garrett to sort out the facts. But two things are certain: someone is dead and the killer knows there was a witness.When a woman from his past emerges as a key piece of the investigation, Garrett is determined to uncover what really happened that day, how she’s involved–and why everything she’s ever told him is a lie.

I was hooked into this book right from the get-go.  On page one, Garrett sees what he suspects is a murder while out for a ride on the ranch’s property.  From there, it only gets crazier.  This was one heck of a ride from beginning to end.

Garrett Sterling is a pretty straight-forward character.  What you see is what you get with him.  So, when he discovers that the love of his life – a woman who disappeared on him two years ago – had been lying to him, it rocks his world.  But as soon as he realizes she’s truly in danger, he’s all in to protect her, no matter what.  This really endeared him to me in that, despite wanting answers, his first concern is for her safety.

Joslyn Charles – aka Monica Wilmington – is another story.  She’s so used to pretending to be someone else, you’re never quite sure if she’s being truthful or not.  You want to believe her, simply because Garrett is obviously still smitten, but it’s hard to trust her, too.

Luck of the Draw is an intense, engaging story that grabs you from the first page and carries you along right up until the end.  There was even a little twist at the end – the one person I thought was going to turn out to be an okay person, wasn’t.  I love it when I can be surprised like that.  Now, I’m eagerly awaiting the third book in this series so I can get to know Shade like I have Will and Garrett.

*Thanks to Netgalley, the author and the publisher for an advanced copy in exchange for a fair review.