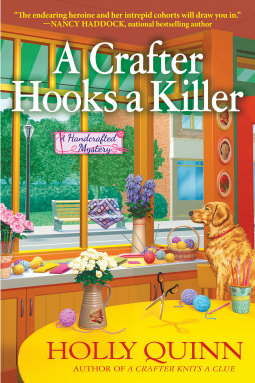 Community Craft proprietor Sammy Kane suspects that a tantalizing thread links the deaths of her best friend and a bestselling author. But can she weave together the clues?

Samantha “Sammy” Kane is settling into her new life in idyllic Heartsford, Wisconsin, running her late friend Kate Allen’s craft shop, Community Craft when one early June day, bestselling crochet author Jane Johnson visits Heartsford. Captivated by Community Craft, Jane devotes a chapter in her new book, Behind the Seams, to the store. Sammy is honored, though satisfaction quickly turns to shock when she finds Jane strangled to death―her cold hands clutching a copy of her most recently published book, with the words “THE END” raggedly scratched into the cover.

Heavens to Etsy! Not only must Sammy contend with the author’s inauspicious demise, she has to untie some knotty details from her own past. It turns out Kate’s death was not what it seemed, and instead somehow hooked to Jane Johnson’s demise. Handsome Detective Liam Nash is on the “skein”, more than happy to see the shop owner again, if less than enamored by her sleuthing interventions. But this was Sammy’s best friend―she has to know.

Fortunately, Sammy has a “lace” in the hole. As a child, she formed the S.H.E. detective team with her cousin, Heidi, and her sister, Ellie. Having already reconstituted their partnership, the S.H.E. team searches for a pattern behind the latest death. As the case starts to unravel, will Sammy and team be able to sidestep Liam quick enough to stitch together the clues?

I was so happy to return to Heartsford and Community Craft!  Coming from a small town in the Midwest, the whole idea appeals to me.  Although I’ve been out of Illinois for many years at this point, I still feel drawn to the whole area.  The people in Heartsford remind me of my family and their friends who still live out that way and that really endears them all to me in a big way.

Sammy Kane is a much more well-rounded character in this second novel.  I had a few issues with her in the first novel, mainly how prickly she could be and the fact she wouldn’t let anyone help her do anything, not even her fellow SHE’s.  That, thankfully, changed in this sequel.  While she’s still very adamant on doing things her way, Sammy is less reluctant to accept help.  I also love that she and Detective Nash come to an understanding in regards to her snooping.  They both know she shouldn’t be doing it, but now he at least understands she’s not going to stop either.

A Crafter Hooks a Killer is a fun and enjoyable murder mystery with a few twists I hadn’t seen coming.  The mystery surrounding Kate’s murder – the reason Sammy returned to Heartsford – was a nice addition.  Although the end result didn’t make anyone happy, I enjoyed the way it all played out in the end.  Can’t wait to see what kind of trouble Sammy and her SHEs get into in the next novel.

*Thanks to Netgalley, the author, and the publisher for an advanced copy of the book in exchange for a fair review.