I’m not really sure what this means so I’m going to guess and tell you about what I’m currently reading. 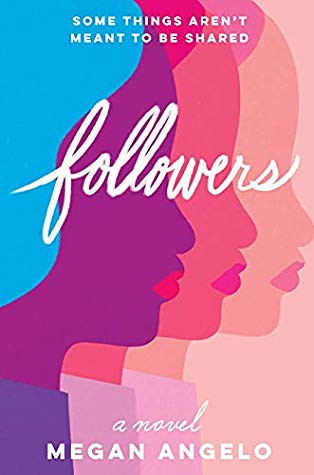 An electrifying story of two ambitious friends, the dark choices they make and the profound moment that changes the meaning of privacy forever.

Orla Cadden dreams of literary success, but she’s stuck writing about movie-star hookups and influencer yoga moves. Orla has no idea how to change her life until her new roommate, Floss―a striving, wannabe A-lister―comes up with a plan for launching them both into the high-profile lives they so desperately crave. But it’s only when Orla and Floss abandon all pretense of ethics that social media responds with the most terrifying feedback of all: overwhelming success.

Thirty-five years later, in a closed California village where government-appointed celebrities live every moment of the day on camera, a woman named Marlow discovers a shattering secret about her past. Despite her massive popularity―twelve million loyal followers―Marlow dreams of fleeing the corporate sponsors who would do anything, even horrible things, to keep her on-screen. When she learns that her whole family history is a lie, Marlow finally summons the courage to run in search of the truth, no matter the risks.

Followers traces the paths of Orla, Floss and Marlow as they wind through time toward each other, and toward a cataclysmic event that sends America into lasting upheaval. At turns wry and tender, bleak and hopeful, this darkly funny story reminds us that even if we obsess over famous people we’ll never meet, what we really crave is genuine human connection.

First off, I love the cover for this.  It’s very bright and eye-catching, even more so in print!

Second, I’m one of those oddballs that likes alternating timelines. The one that follows Orla and Floss is set in 2015.  Marlow’s, however, is set in 2051.  This fascinates me because a) 2015 was only a couplel years ago and b) 2051 isn’t really all that far off.  So, the things that are talked about in this book – social media, the effects of too much screen time, and a literal living social media television show of sorts are not as out there as they might have been ten or twenty years ago.

Currently, I’m only about 150 pages into this, and I’m loving it.  The characters are interesting and engaging and the setup is a truly interesting one.