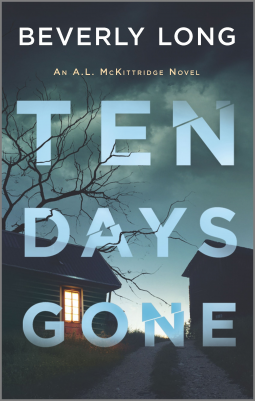 They know exactly when he’ll strike… They just have to find him first.

In all their years working for the Baywood police department, detectives A.L. McKittridge and Rena Morgan have never seen anything like it. Four women dead in forty days, each killed ten days apart. With nothing connecting the victims and very little evidence, the clock is already counting down to when the next body drops. A.L. and Rena will have to act fast if they’re going to find the killer’s next victim before he does.

But identifying the killer’s next likely target is only half the battle. With pressure pushing in from all sides, a promising breakthrough leads the detectives to Tess Lyons, a woman whose past trauma has left her too damaged to appreciate the danger she’s in. Unwilling to let another woman die, A.L. and Rena will put everything on the line to keep Tess safe and end the killer’s deadly spree once and for all–before time runs out again.

New series are like candy to me.  I’ve stumbled into so many that are in-progress and have fifteen or more books and I get discouraged.  That’s not to say that I won’t start a series with a lot of books, because I will.  Susan Wittig Albert’s Chyna Bales is a good example.  Only just discovered those last year.

So, when I saw Ten Days Gone available on Netgalley, I knew I needed to read it.  I can’t even begin to tell you how happy I am that I clicked the request button and was approved!  I was hooked from the very beginning.  The characters were engaging and the mystery was, too.

Ten Days Gone takes a bit of a different take on your usual police procedural.  Instead of finding the first body and starting the hunt, they’re already three bodies in when the story starts.  I know this might be an unpopular opinion, but I kind of enjoy being thrown into the middle of a story like that.

A. L. was my favorite of the detective pair.  Despite his attitude towards pretty much everyone and everything, his soft spot for his daughter made me smile.  Even the way he did his best to make his ex-wife happy proved he wasn’t the jerk he wanted everyone to think he was.  The initials did bug me a bit, I kept thinking he was Al.  If you’re going to give your main character initials as their name, for me, it needs to be something more common – B. J. or something that you run into more often.  A. L. just threw me every time I saw it.  However, when Tess kept trying to guess what it stood for, I laughed.

Rena took me a bit to warm up to, but once I did, I decided I really liked her.  It’s never easy for female detectives, but she proved herself over and over again to be as good as A. L. or any of the others.  I’m happy that certain things were not what she thought them to be, although I think a little honesty on the other person’s part could have helped.  When the truth came out, it seemed like a ridiculous bit of drama that could have been avoided.

The leadup to discovering the next victim was interesting.  From that point, everything fell into place as all the details came to light.  I thought that the reasons and eventual perp were well thought out and I hadn’t expected any of it.  Truthfully, I had suspected the person who wound up being the killer, but the author did a great job of convincing me it was someone else.  So, when things started pointing back towards them, I was surprised and a bit pleased with myself.

I’m excited to see what the next in this series brings because I want to know more about A. L., Rena, and everyone else.