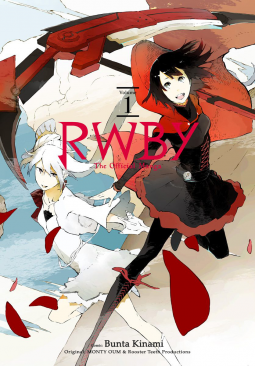 Ever since I first heard about the anime several years ago, I’ve been wanting to get into RWBY.  Due to life and all that comes with it, finding this manga was my first opportunity to dive in.   All I can say is that I wish I had found a way to read and/or watch this sooner.

I was drawn into the story right from the beginning.  Stories and manga/graphic novels about monster hunters are one of my favorites, so discovering Ruby Rose wants to be a Huntress was an instant draw for me.  Add to that she’s about to attend a hunter/huntress boarding school of sorts and I was 110% sold.

Fast-paced and action-packed, this manga doesn’t slow down at all.  You’re rushing and racing alongside the characters from page one until the very end.  My one complaint is that there were too many characters introduced at one time.  It would have been easier for me to remember who they were if their introductions had been spaced out a little bit more.  However, that is fully on me.  I love Ruby Rose and her sister, Yang.  While Yang is a total manga character (right down to glomping her sister repeatedly), she’s a good balance to the more serious Ruby.  Weiss was a bit annoying and grumpy in the beginning, but she’s starting to thaw a little by the end.  Blake’s an interesting character as well and I’ll be waiting to learn more about her and the others in the next volume.

The artwork was the finishing touch on this already enjoyable story.  I loved how the first few pages were in full color and then switching to black and white.  Those color pages really popped and set the tone for the rest of the manga.  Now I need to track down the anime while waiting for the next volume of this manga to release.

*Thanks to Netgalley, the publisher, and the author for a copy of this manga in exchange for a fair review.