The Wednesday Weekly Blogging Challenge is hosted by Long and Short Reviews.  This week’s topic is: the nonfiction book everyone should read and why. 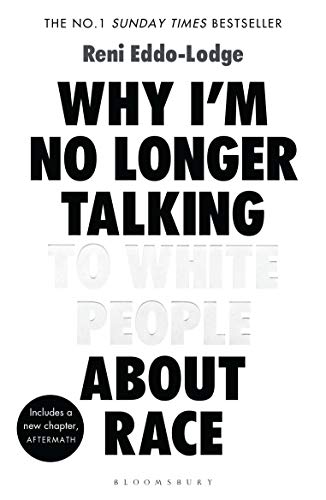 I’m going to go out on a limb and suggest that the reason why we need to read this is obvious considering the current state of the US.  However, in case it’s not, I have come armed with quotes a plenty.

Although this was written by a British woman, the parallels between racism in the UK and here in the US were shocking.  I won’t lie to you and say I knew how it was over there because I had no idea.  I don’t know if it’s because of the way Americans tend to only look at America, or if I’m really just ignorant about the world around me, but I had really hoped that other countries were better at handling racism than the US.  I hate to say it, but I was very, very wrong.

The author is an articulate and engaging writer.  She presents her views and backs them up with personal experience, showing that she’s not pulling all of her opinions out of a hat.  She also opened my eyes to things I hadn’t noticed (hint: I’m very white) and helped me understand better what racism is and how it effects people of color.  She also clued me in to the history of slavery in Great Britain:

Liverpool had been Britain’s biggest slave port. One and a half million African people had passed through the city’s ports.

This surprised me.  When I think about the slave trade, my information is very US-centric.  Which makes sense considering that I’m an American.  It was one of many indications of how my education has failed me.  But I’m not the only one either:

But I don’t think my ignorance was an individual thing. That I had to go looking for significant moments in black British history suggests to me that I had been kept ignorant. While the black British story is starved of oxygen, the US struggle against racism is globalised into the story of the struggle against racism that we should look to for inspiration – eclipsing the black British story so much that we convince ourselves that Britain has never had a problem with race.

I’m not sure how much better the US is at this, but slavery is definitely a lot more up front in this country due to the Civil War, among other events in our past.

I also learned a lot about coded language.  Some things were obvious to me, like the use of ‘race riot’, but others weren’t.  For example:

But the importation of the word mugging brought with it a coded implication that the perpetrators were overwhelmingly black, and that mugging was an exclusively black crime.

It’s funny because too many gangster movies as a kid has led me to equate mugging with New York City and some crazy white person holding up a woman wearing her finest.

I think that the biggest reason why this book is so important is because it breaks down what racism is as well as how ingrained it is in our society.  Not to mention white privilege, a phrase that’s been used a lot, especially lately.  But when you’re the one with the privilege, it’s hard to even know you have it.  So, for the author to explain it as well as provide examples of it in action, it was easier for me to grasp and realize that yes, it’s very much at work in my own life and all around me.

This is where I feel like I should apologize to the author and POC everywhere, because I shouldn’t have had to rely on someone else to educate me on this.

Put like that, I wonder how I missed it.  But then, I’ve been raised, albeit unintentionally, to not notice either.

This is one of the things that stood out to me the most:

The idea of white privilege forces white people who aren’t actively racist to confront their own complicity in its continuing existence. White privilege is dull, grinding complacency. It is par for the course in a world in which drastic race inequality is responded to with a shoulder shrug, considered just the norm.

The reality of this hit me in the face.  How do we not see this happening?  How are we not more active in changing the norm so that it reflects the true diversity of our country? Racism shouldn’t be the norm, it shouldn’t have ever been the norm, but here we are.  The question is, what do we do about it?

Something else that stood out to me was her take on reverse racism.  I must not have highlighted the quote (and I swear, I think I highlighted half of the book, so how did I miss this?), because I can’t find it, but she states that reverse racism doesn’t exist because racism = prejudice + power.  And she explains (because this I highlighted, hah):

Racism does not go both ways. There are unique forms of discrimination that are backed up by entitlement, assertion and, most importantly, supported by a structural power strong enough to scare you into complying with the demands of the status quo. We have to recognise this.

I know that will likely ruffle some feathers, but cries of reverse racism from white people have always rubbed me the wrong way, even as an overly sensitive white person myself.  I’m glad I finally have a way to understand why it bugged me so much now.

This, I feel, applies to Americans as well.  Especially since we have a history of taking every challenge head on:

I think that there is a fear among many white people that accepting Britain’s difficult history with race means somehow admitting defeat.

But there’s no defeat in recognizing that things need to change, in my opinion.

I feel like this post is a hot mess and a half, but hopefully I got my point across.  This book is important because it is factual and in your face reality.  It’s important because as a white person, I need to learn to check my privilege and/or use it to help others acquire equal footing.

I’m going to leave you with one last quote:

I consider myself to be part of a movement, and I think that if you are deeply touched by what you read in this book, then you are part of that movement too. It’s happening right now.

*All quotes taken from the Kindle version of the novel, borrowed from my local library.

Notes From A Paper Plane Nomad