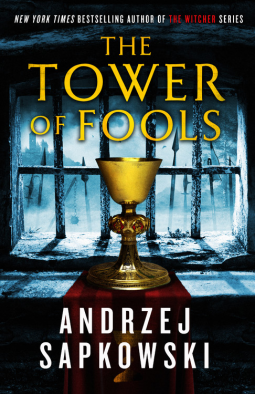 Reinmar of Bielau, called Reynevan, flees after being caught in an affair with a knight’s wife.

With strange, mystical forces gathering in the shadows and pursued not only by the Stercza brothers bent on vengeance, but also by the Holy Inquisition, Reynevan finds himself in the Narrenturm, the Tower of Fools, a medieval asylum for the mad, or for those who dare to think differently and challenge the prevailing order.

The ‘patients’ of this institution form an incomparable gallery of colourful types: including, among others, the young Copernicus, proclaiming the truth of the heliocentric solar system.

Historical fiction is one of my favorite genres, so when I discovered historical fantasy, I was excited.  And for it to be written by the amazing Andrzej Sapkowski?  Consider me sold.

Going into this, I didn’t know anything about the Hussites or their war against the Catholic Church, so this novel served two purposes: it entertained and informed me.  Since I’m a nerd, I appreciated that part more than others might.

Reinmar of Bielau, aka Reynevan, is one of those characters that you aren’t sure if you should love him or hate him.  I settled into the fact that it was going to be a bit of both.  He’s dedicated, he’s loyal, but he’s also a hot mess who makes a lot of bad decisions.  Like a lot of them.  It doesn’t seem to matter how much good counsel he has, Reynevan always seems to pick the wrong option.  I have to admit that I kind of loved his dedication to being an idiot, however.

Since this is an epic fantasy, you have to have a group of friends, right?  Well, Reynevan sort of has this.  He has a group anyway, but the jury’s out on whether they’re his friends or not.  In a series like this, you need great supporting characters to help bolster (and smack down) your hero.  The author gives you some great companions in Scharley, Samson, and others.  Scharley is probably my favorite because he’s so irreverent, obnoxious, and not having any of Reynevan’s garbage.

As a fan of The Witcher series, I was hoping that The Hussite Trilogy would bring some of the author’s trademark humor.  I was not disappointed.  One of my favorite things was the narrator’s introductions to each chapter.  They were witty, informative, and often blasted Reynevan for his usual poor choices.  Sometimes, they’d even tell you what was about to happen, although in a way that left you surprised.

I’m thrilled that this trilogy is finally being translated into English so that I – and others – can enjoy it.  Anxiously awaiting the next in the series which will hopefully be available soon.

*Thanks to Netgalley, the author, and the publisher for an advanced copy of the novel in exchange for a fair review.