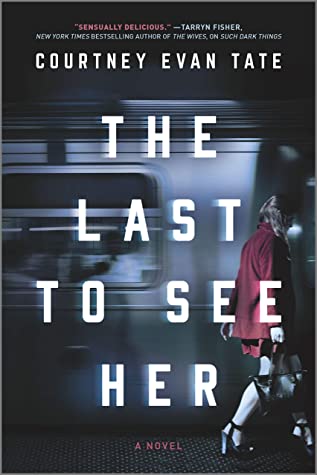 A woman disappears into the dark city night…

Gen is on the verge of a divorce from her cheating husband. When her sister, Meg, has a convention to attend in the Big Apple, she invites Gen along to celebrate her newly found freedom. But the perfect sisters’ getaway quickly goes awry when a tipsy Gen defiantly throws her wedding ring off the hotel room’s balcony. Then, wanting some fresh air, she decides to take a late-evening walk alone and vanishes without a trace.

The investigation that follows uncovers secrets—and betrayals—between sisters and spouses that will twist the truth in on itself until nothing is clear.

What really happened to Gen and who, besides Meg, was the last to see her?

This was a bit of a crazy book so I’m not even sure where I should start.  Wow.

Gen and Meg aren’t just sisters, but also best friends.  They tell each other everything, or so they think.  In truth, they’re both hiding more from the other than either could have thought.  Even as the truth unfolds, watching their relationship is interesting.  They rely on each other for friendship, support, and so much more.

The sisters couldn’t be more opposite, however.  Which, honestly, isn’t that surprising.  My sister and I are like night and day in a lot of respects, it’s natural.  Gen and Meg are total polar opposites, though.  Meg is a surgeon, meticulous, down-to-earth, ambitious, and stolid.  Gen, on the other hand, is a writer, a dreamer, footloose and fancy free.  So, of course, there are clashes of personality and petty jealousies all over the place.  The sisters were both likable and unlikable at times, making them both very human and normal.  For the first 75% of the book, I do think I favored Gen over Meg, but that’s likely what the author was going for, too.  I did find more sympathy for Meg by the end, though.

Thad, on the other hand, I never quite liked him, even in the flashbacks where he and Gen were happy.  He came across as very detached and unconcerned through a lot of the book.  Plus, some of the decisions he makes during the course of the book left me scratching my head.  Avoiding trauma makes sense, but to think someone you loved wouldn’t understand certain things stumped me.

There were two side characters that I enjoyed a lot.  The first is Nate Hawkins, aka Hawk, the NYPD detective investigating Gen’s disappearance.  He’s very no-nonsense and doesn’t let Meg get under his skin with her constant calls, visits, etc.  He also isn’t ever fazed by her outrage over the fact he’s looking at her as a suspect, as he should be doing.  The other is Simon Jenkins, a private eye hired by Gen.  He’s a retired cop, so he’s older than Hawk, but just as determined to try and find the truth.

Although the story wasn’t very fast paced, it was interesting and engaging.  The way the chapters rotated through both different points of view as well as past and present helped build tension while also giving the necessary backstory for the present day.  The author does a good job of keeping you guessing, making you wonder what really happened to Gen.  The big reveal was both a surprise and not, something maybe I should have seen coming, but didn’t.  I always seem to miss the obvious, so often the big reveal is a head slap moment for me.  But, that’s one of the reasons I keep reading these novels – maybe one day I’ll be good enough to figure it out.