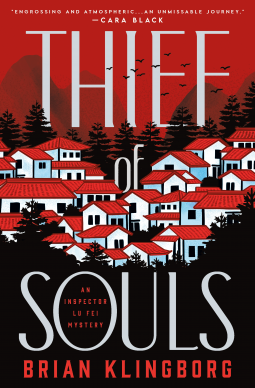 Lu Fei is a graduate of China’s top police college but he’s been assigned to a sleepy backwater town in northern China, where almost nothing happens and the theft of a few chickens represents a major crime wave. That is until a young woman is found dead, her organs removed, and joss paper stuffed in her mouth. The CID in Beijing–headed by a rising political star–is on the case but in an increasingly authoritarian China, prosperity and political stability are far more important than solving the murder of an insignificant village girl. As such, the CID head is interested in pinning the crime on the first available suspect rather than wading into uncomfortable truths, leaving Lu Fei on his own.

As Lu digs deeper into the gruesome murder, he finds himself facing old enemies and creating new ones in the form of local Communist Party bosses and corrupt business interests. Despite these rising obstacles, Lu remains determined to find the real killer, especially after he links the murder to other unsolved homicides. But the closer he gets to the heart of the mystery, the more he puts himself and his loved ones in danger.

Corruption isn’t anything new to The People’s Republic and even the Public Security Bureau isn’t immune. Which makes it even harder for those members of the PSB who are straight and trying to do their jobs the best they can. Inspector Lu Fei isn’t deterred, however, and is determined to see this through to the end – and refuses to let an innocent man go down for something he didn’t do.  But can he convince his superiors that he’s innocent?

Lu Fei is one of the best detectives/inspectors I’ve read in a long time.  Ninety-nine percent of the time, he’s cool as a cucumber.  But that one percent when he loses it?  He loses it in a most spectacular fashion.  And it is glorious to behold.  His determination and dedication to the case was interesting to see in contrast to those around him.  It’s even said to him that once an arrest is made, it’s rarely overturned, so once you’re nabbed, you’re off to prison, guilty or not.  Which makes Lu’s drive to solve the case even more admirable.

Since a small place like Raven Valley Township isn’t equipped to solve a murder on their own, so they’re forced to call in the big guns – the CIB.  Sent to help Lu is Deputy Director Song.  Although things are rocky at first between Lu and Song, they eventually find an uneasy peace allowing them to work together.  And despite Song’s tendency to be snappish with Lu, I loved the two of them together.  They created a nice balance of big city and country.

One of the best parts of this novel was the author’s knowledge of Chinese society and culture.  Words and phrases are dropped here and there, but always immediately explained so that you aren’t left wondering what’s meant.  The author has an easy way of working the explanations into the narrative as well, so it doesn’t generally feel like they’re stopping to explain something to you either.  It’s interesting to me to learn about other places and cultures, and to see how law enforcement operates under Communism was fascinating.

Thief of Souls is an engaging and entreating trek through Chinese law enforcement.  I hope that there’s another in this series soon and that the author brings Deputy Director Song back.  By the end, he and Lu were on a more level playing field and I loved how they parted.  Also, I need to know if Lu managed to confess his feelings to Yangyang because they’re great together.  Even if they stay friends, she’s a great influence on him.  Overall, I’d highly recommend this to anyone who loves an unconventional police procedural.

*Thanks to Netgalley, the author, and the publisher for an advanced copy of this book in exchange for a fair and honest review.