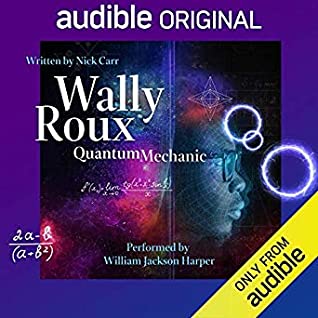 A teenage genius with a big imagination, Wally just moved to Savannah, GA from Maine with his mom, who adopted Wally when he was an infant. In this charming and sweet solo show, Wally investigates a hiccup in the spacetime fabric of his neighborhood which is causing a number of strange events and occurrences. Part science fiction and part coming-of-age story, Wally Roux charts one boy’s journey of self-discovery and identity.

Wally Roux, Quantum Mechanic is a short audiobook narrated by William Jackson Harper.  I didn’t recognize the narrator’s name (because I’m flat out horrible remembering things like that) but the second I heard his voice, I knew who he was.  The Good Place was one of my guilty pleasures and hearing Chidi narrate was such a joy.  He has a great delivery and a very animated voice that only adds to the cuteness of this quick story.

For such a short story, it clocks in at just under two hours in length, it covers a lot of topics: bullying, puberty, adoption, race issues, and oh, quantum mechanics, among other things.  The way it’s written leans towards stream of consciousness at times which works well for an audiobook.  You move from one moment in time to a memory and back again, learning about Wally’s life and how he wound up where he is.  There isn’t a strong plot, but the little anecdotes you get throughout make up for that in my opinion.

If you’re looking for a cute, quirky, and laugh out loud funny audiobook that you can get through in a single sitting, this is the one for you.