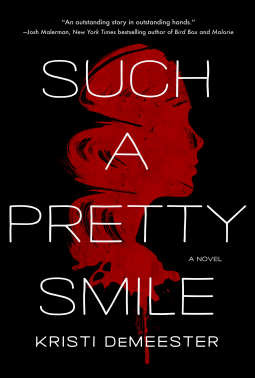 There’s something out there that’s killing. Known only as The Cur, he leaves no traces, save for the torn bodies of girls, on the verge of becoming women, who are known as trouble-makers; those who refuse to conform, to know their place. Girls who don’t know when to shut up.

2019: Thirteen-year-old Lila Sawyer has secrets she can’t share with anyone. Not the school psychologist she’s seeing. Not her father, who has a new wife, and a new baby. And not her mother—the infamous Caroline Sawyer, a unique artist whose eerie sculptures, made from bent twigs and crimped leaves, have made her a local celebrity. But soon Lila feels haunted from within, terrorized by a delicious evil that shows her how to find her voice—until she is punished for using it.

2004: Caroline Sawyer hears dogs everywhere. Snarling, barking, teeth snapping that no one else seems to notice. At first, she blames the phantom sounds on her insomnia and her acute stress in caring for her ailing father. But then the delusions begin to take shape—both in her waking hours, and in the violent, visceral sculptures she creates while in a trance-like state. Her fiancé is convinced she needs help. Her new psychiatrist waves her “problem” away with pills. But Caroline’s past is a dark cellar, filled with repressed memories and a lurking horror that the men around her can’t understand.

As past demons become a present threat, both Caroline and Lila must chase the source of this unrelenting, oppressive power to its malignant core. Brilliantly paced, unsettling to the bone, and unapologetically fierce, Such a Pretty Smile is a powerful allegory for what it can mean to be a woman, and an untamed rallying cry for anyone ever told to sit down, shut up, and smile pretty.

I honestly don’t even know where to start with this book.  Intense, crazy, brutal, heart wrenching – all that and more is contained within these pages.  However, it all works together to form an intricate and engaging story that I couldn’t tear myself away from.

The novel is split between two timelines – Caroline in 2004 and Lila in 2019.  For the first part of the book, I was much more invested in Lila’s timeline.  But, the farther we get into the story, the more interesting Caroline’s story becomes.  I was glued to my Kindle for the last third of her story.  It was fascinating to watch how the storylines came together and then merged at the end, bringing everything full circle finally.

Lila flipped back and forth between being a sympathetic character and being obnoxious, but it worked for her character in the end, showed how she was being manipulated.  Caroline, on the other hand, I felt awful for pretty much from the beginning.  Being a single mom, having issues of her own, and then a daughter with potential issues as well.

Such a Pretty Smile definitely isn’t for everyone.  It’s fast-paced and intense, but there are scenes that are brutal, nightmarish, and, often, both.  Proceed with caution on this one as it’s the kind of book to go for the jugular, but in a magnificent sort of way.

*Thanks to Netgalley, the author, and the publisher for an advanced copy of this novel in exchange for an honest review.