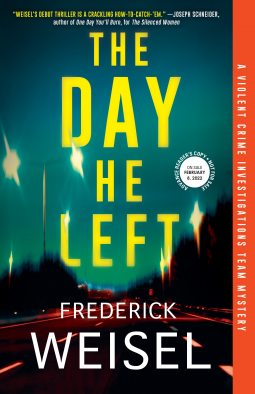 Annie has fallen out of the habit of listening to her husband. She and Paul have been married for a long time; it’s easy to nod as he drones on, responding to his voice while completely ignoring every word he says. That becomes a problem, of course, when Paul disappears and the police have questions. Was Paul having issues at work? Is there any reason to think he might harm himself? Annie doesn’t know.

An unsettling photo found amongst Paul’s things turns the investigation toward his job as a middle school teacher and a troubled girl who is hiding secrets of her own. But what exactly happened to Paul on the day he left for work and never made it to the classroom? Is his disappearance related to a local heroin trafficking operation? As Eddie Mahler and the members of the Santa Rosa Violent Crime Investigations Team rush to find the teacher, they discover the members of his family have hidden lives of their own, and that Paul may not have been running away but toward something that could ruin his career and marriage–and even cost his life.

It’s something we all dread – having someone we love disappear without a trace.  No reason, no explanation, just gone.  I’d be beside myself with worry and overflowing with questions for sure.

Annie Behrens isn’t a very sympathetic character at the start of the novel.  She’s actually pretty unlikable, which might have been the point.  She admits to not having listened to her husband in months and engages in a lot of questionable activity.  And yet, when her husband, Paul, goes missing, everything seems to change perspective for her.  Their son, Jesse, is a mess and also unlikable at times, but he’s also sixteen.  A lot of kids are unlikable at that age, although he does come around by the end.  Claire, their thirteen-year-old daughter seems to be the only one without any secrets.

I didn’t realize when I requested this book that it was the second in a series.  If I’d read the first in the series, I probably would have been more comfortable with the VCI team investigating the disappearance.  However, I did learn a lot about them as we moved through the novel and came to like them all by the end.  Eddie was likable from the beginning, there was something about him that drew me in.  Eden was the one I struggled with the most, but she’s a great analyst and has a good future with the team, I believe.  Frames, Rivas, and Bailey round the group out and each have their own qualities and specialties that contribute towards the solve.  I like it when each member has their own thing to add to the group, helping them to stand out amongst the others.

While the action takes a bit to pick up the pace, the story is laid out before you in an interesting and easy to follow manner.  It builds on itself and throws you a couple times as you follow the investigation.  Honestly, I had no idea why Paul had bolted or who the bad guy was.  When it was revealed, it made sense and was both a surprise and not at the same time.  I’m looking forward to reading the first in the series while I wait for the next to come out.  I want to know more about this team and how they fit together as a unit.

*Thanks to Netgalley, the author, and the publisher for an advanced copy of the book in exchange for a fair and honest review.

2 thoughts on “Review: The Day He Left by Frederick Weisel”