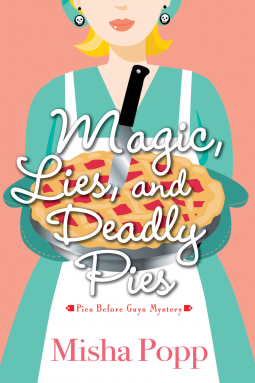 Daisy Ellery’s pies have a secret ingredient: The magical ability to avenge women done wrong by men. But Daisy finds herself on the receiving end in Misha Popp’s cozy series debut, a sweet-as-buttercream treat for fans of Ellery Adams and Mary Maxwell.

The first time Daisy Ellery killed a man with a pie, it was an accident. Now, it’s her calling. Daisy bakes sweet vengeance into her pastries, which she and her dog Zoe deliver to the men who’ve done dirty deeds to the town’s women. But if she can’t solve the one crime that’s not of her own baking, she’ll be out of the pie pan and into the oven.

Parking her Pies Before Guys mobile bakery van outside the local diner, Daisy is informed by Frank, the crusty diner owner, that someone’s been prowling around the van—and not just to inhale the delectable aroma. Already on thin icing with Frank, she finds a letter on her door, threatening to reveal her unsavory secret sideline of pie a la murder.

Blackmail? But who whipped up this half-baked plot to cut a slice out of Daisy’s business? Purple-haired campus do-gooder Melly? Noel, the tender—if flaky—farm boy? Or one of the abusive men who prefer their pie without a deadly scoop of payback?

The upcoming statewide pie contest could be Daisy’s big chance to help wronged women everywhere…if she doesn’t meet a sticky end first. Because Daisy knows the blackmailer won’t stop until her business is in crumbles.

The thing about cozy mysteries is that they always have the best titles.  This one, for sure, grabbed my attention.  Then the blurb?  How can you not want to read about a woman who gets revenge a la mode?  Color me instantly interested.

Daisy is one of the best characters I’ve read in some time.  She’s confident and competent, but also has her moments of insecurity.  Her dedication to helping others out of awful situations is admirable, even if it isn’t exactly the best course of action sometimes.  I also love that she acknowledged her flaws when they poked their heads out of hiding.  Self-aware characters are a good thing.

Noel is sweet and a lot of fun, although I didn’t completely trust him when he first appeared.  His orchard was a blessing in disguise for Daisy, and her pie business and his orchard fit together perfectly.  Melly, on the other hand, annoyed me.  I loved her energy, but the way she was constantly popping into Daisy’s life unexpectedly, letting herself into Penny, etc., rubbed me the wrong way.  She did mellow a touch by the end, but she was not my favorite of the group.

Overall, the mystery was engaging and the characters were a lot of fun.  The guys in the diner were fun, the ladies Daisy met through Pies Before Guys were also a lot of fun, despite what they’d been through.  Probably the best part of the whole story, however, was the way that the magic worked.  Daisy could only put thoughts and intentions into her pies, not commands.  I like that it worked with what was already inside a person rather than against their will.  It’s a very important distinction, in my opinion.

*Thanks to Netgalley, the author, and the publisher for an advanced copy of the book in exchange for a fair and honest review.