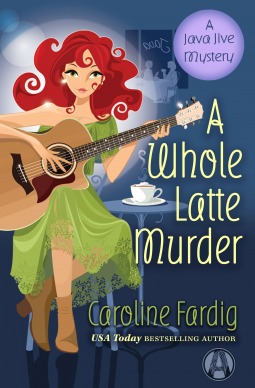 Suddenly every Nashville resident is on high alert, especially Juliet’s neighbor Chelsea. Juliet does her best to calm the girl’s nerves, but her worst fears are confirmed when she finds Chelsea dead. Even though she tries her best to stay out of it, Juliet’s involvement puts a strain on Ryder’s first homicide case. The situation soon becomes even more personal for Juliet and her best friend Pete Bennett when one of their employees disappears during her shift. As a killer lurks in the shadows, Juliet, Pete, and Ryder seek out a double shot of justice.

This third installment in the Java Jive Mysteries kicks off with a bang.  Despite her best efforts to stay out of the sleuthing business, Juliet is once again drawn into the thick of it.  Investigating the murder of her neighbor and friend is nearly more than she can take.  Especially when more people begin to disappear.

There’s a lot more to this story than the previous two.  The plot’s more intricate with more going on, which is a good thing because the author pulls it all together and makes it work in the end.  She keeps you guessing up until the end when it’s all finally revealed.  Despite that, this wasn’t my favorite in the series for a few reasons, which I’ll get into in a minute.

Juliet does have some character growth in this book.  She begins to learn that she can’t just jump right into a mystery and start to solve it.  It’s taken three books, but she’s learned that putting herself in constant danger could possibly get her killed, and nearly does.  That, however, does not completely stop her, either, but why would it?  We wouldn’t have a story if she did.

Pete regresses a bit in this book.  I get that he’s still grieving after his fiancée was murdered in the previous book, but his attitude at times was over the top.  Having lost my husband a couple years ago, I know first hand how hard that can be, but his mood swings and anger were a bit much.  I am happy that he starts to work through it by the end of the book though.  Poor guy’s been through a lot.

Ryder gets a promotion to homicide, which he’s thrilled about.  However, this is the beginning of everything that drove me nuts in this book.  Juliet suddenly becomes insanely worried about him.  Which is understandable, but he’s been a detective for years.  Even if the move to homicide might be more dangerous, he still has years of experience behind him.  Also, Ryder’s move puts him on edge where Juliet’s sleuthing is concerned.  Again, understandable, considering she’s always in his cases causing trouble.  But the way it impacts their relationship and the way they react to each other really bothered me.  I’m hoping that in the next book they find a way to be friendly again, even if they aren’t a couple.  The antagonism between them began to ruin the fun vibe they had previously.

However, my issues aside, this was possibly the most well-developed mystery of the series.  I look forward to reading the next in the series as soon as I’m able.