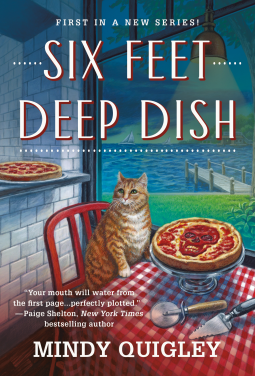 Delilah O’Leary can’t wait to open her new gourmet deep-dish pizzeria in Geneva Bay, Wisconsin—a charming resort town with a long history as a mobsters’ hideaway, millionaires’ playground, and vacation mecca. Engaged to a hunk with a hefty trust fund, Delilah is poised to begin a life that’s just about as delicious as one of her cheesy creations.

Just before opening night, though, Delilah’s plans for pizza perfection hit the skids when her fiancé dumps her and leaves her with a very large memento from their relationship—Butterball, their spoiled, plus-sized tabby cat.

Delilah’s trouble deepens when she discovers a dead body and finds her elderly aunt holding the murder weapon. Handsome local police detective Calvin Capone, great grandson of the legendary gangster, opens an investigation, threatening to sink Delilah’s pie-in-the-sky ambitions before they can even get off the ground. To save her aunt and get her pizza place generating some dough, Delilah must deliver the real killer.

Cozy mysteries are like food for the soul for me.  When they’re food themed, it’s even better.  While I’d never make it as a detective, I’m actually a pretty decent cook.  Throw in a Chicago transplant and some good old deep dish pizza and I was sold.  Oh, and did I forget to mention the tubby kitty named Butterball?  Well, his furry self only added to the allure.

Delilah is very much a Type A personality, which drove me crazy for the first couple of chapters.  Once Sam walks out, she starts listening to her friends and loosens her grip on the reins a bit, making her much more likable.  She still has that need to control, but it’s softened into a more manageable quirk.  This is when her real personality starts to shine.  The way she interacts with Biz and Butterball show her true self.

I thought I was going to like Sam, but his conflict avoidance bordered on pathological.  I hate conflict myself, but I face up to it when necessary.  Not Sam though.  It’s surprising that they managed to make it three years before imploding.  That said, he does seem like a nice guy and I hope that he pops up in future novels.

Calvin Capone has to be my favorite cozy detective to date.  He was handsome (of course), descended from a notorious mobster (fitting), and absolutely adorable around both Butterball and his granddaughter.  He won me over the first time he interacted with Delilah’s cat, honestly.  But he also had more patience for Delilah than most cozy detectives have.  He doesn’t let her get away with much, but he’s not on her case 24/7 either.

The group that Delilah has working with her at Delilah & Son are a great bunch.  Her best friend, Sonya, is both a hot mess at times and the most loyal friend ever.  Rabbit is the one I’m most interested in seeing in the next book.  He has so much potential for growth and fun.

Overall, Six Feet Deep Dish had one of the best mysteries for a first in series novel.  I honestly had no idea who was responsible for the murder, although I had several suspects.  The actual reveal of the murderer and the depth of the suspicion around the dead body was a surprise.  I’m greatly looking forward to the next in this series, and hopefully many more in the future.

*Thanks to Netgalley, the author, and the publisher for an advanced copy of this book.