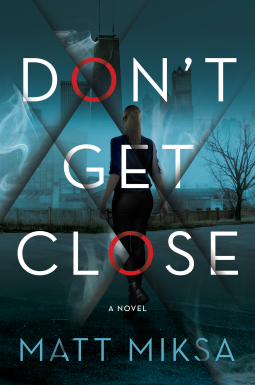 An infamous reincarnation cult resurfaces in the wake of a deadly bombing, and it’s up to an FBI novice to learn its true aim—and uncover its dark past before it consumes her.

Special Agent Vera Taggart walked away from a promising career as an artist to join the FBI, and she impresses her new colleagues with her eerie ability to divine conclusions from the grisliest crime scenes. Taggart’s first assignment is a decades-old cold case centered on a cult of suicide bombers known as the Sons of Elijah who believe they’ve been reborn hundreds of times, going back centuries. It seems like a low-risk assignment until a bomb tears apart a crowded Chicago restaurant. The Sons of Elijah have returned—and now it’s up to Taggart to stop their modern-day reign of terror.

Taggart’s investigation begins with Dr. Seth Jacobson, a renowned psychiatrist who claims to help people remember past lives through hypnotherapy. Jacobson had treated two of the Sons of Elijah’s founders before they’d gone on to commit a series of horrific murders. Desperate to understand how these ordinary patients could have taken such a violent path, Taggart agrees to undergo similar treatment with Jacobson.

Through her hypnosis sessions, Taggart comes to suspect the Sons of Elijah are targeting a high-tech government laboratory that could expose the group’s greatest secret with a controversial experiment. To save millions of innocent lives, Tag must come to grips with the shocking truth about the cult and her own puzzling role in its timeless mission. The fate of humanity rests on her ability to determine which threats are real and which exist only in her mind—and to decide whose side she’s really fighting for.

Vera Taggart is an agent in training and yet seems to have a better grasp on things than those around her.   She’s strong-willed, determined, and quite entertaining when she wants to be.  I liked her a lot, and that affection only grew as the story went on.  Even her not-so-great decisions seemed to make sense to me after a time.  Her partner, on the other hand, annoyed and aggravated me most of the time.  Which I think is partly why I enjoyed her decisions to go off track more than I should have.

I loved the idea of using past-life regression therapy to solve the case.  While I’m not sure I fully buy into past lives, it is interesting to delve into and read about.  The way that the author connected all of Taggart’s past lives with those of others from the Sons of Elijah was seamless and believable in the story.  It was an unusual way to progress the story and I thought it brought an interesting angle to solving the crime.

This book ticked a lot of boxes for me.  Crazy cults?  Yes!  Psychology with unconventional methods?  Yes!  Cold case?  Heck yeah.  I was all in from the very beginning.  Don’t Get Close starts off with a literal bang and keeps going.  This is the second cult-related book I’ve read in the last several weeks and I’ve enjoyed them both quite a bit.  But the way that the author combined the cold case with past-life regression to prevent a possible current crime is what did it for me in the end.  It was also nice to have a female main character who wasn’t your usual FBI type.  I’d highly recommend this to anyone who loves a fast paced thriller with unusual elements thrown in.

*Thanks to Netgalley, the author, and the publisher for a copy of this book in exchange for a fair and honest review.