What I read last week:

When the Lights Go Out by Mary Kubica

I just finished this on Sunday and don’t know what to think.  There was one heck of a twist at the end and I’m not sure how I feel about it.

Lincoln’s Last Trial: The Murder Case that Propelled Him to the Presidency by Dan Abrams and David Fisher

Although I don’t often read a lot of nonficiton, this was an interesting recreation of the last murder trial Abraham Lincoln attended as a laywer before running for president.  I learned a lot about Lincoln as well as the way the law worked back in his time.  Some things surprised me while others didn’t.  We’ve progressed a lot since then.

Because of my above-mentioned wishy-washyness, I have several I started this past week.

Saddle Up by A M Arthur

Yeah, I’m still working on this.  I think I’m officially over m/m romance for the time being.  Nothing against this book becuase I like both Miles and Reyes and the author’s writing style is fun and easy, but I’m having a hard time sticking with it.  Which is funny because I still write one heck of a lot of this kind of fiction.  Yeah, I know, I have issues.

Not sure I’ve opened this back up since the last time.  Oops.  Maybe once I get some of these others cleared up?  *crosses fingers*

Coffin Road by Peter May

This is a buddy read for a group I belong to and, although I’m only about 30% in so far, it’s really intriguing. I love a good amnesia-based thriller.

What I’m reading next (hopefully):

Dodging and Burning by John Copenhaven

This is going to get thrown out the window though.  The above books are my goal but I have two more that just came up on hold from the library. Why do I do this to myself?  *sigh* 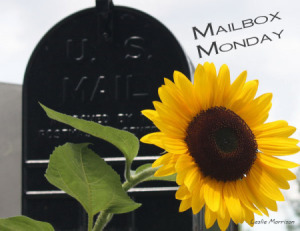 I’m going to fess up right now.  I’m scatterbrained and disorganized.  That said, I hope no one minds if I combine two memes into one becuase I really do love both of these ideas.  Especially since between Amazon and PaperbackSwap, I tend to get more books in the mail than I should.

Cloche and Dagger by Jenn McKinlay is the only thing to land in my mailbox this week.  It’s the first in her Hat Shop Mystery series and looks really cute.

Next week ought to be more exciting. I have two books on the way via Paperback Swap, one from Amazon and a mystery box being sent by a friend.  Friend said, “Oh, I threw a few James Patterson ones in there and a couple others I thought you might like.”  So yeah, if I didn’t have to work, you know I’d be standing at the window all day until they arrived.  I also may have ordered a tarot deck off eBay but WE’RE NOT TELLING ANYONE THAT.

23 thoughts on “Monday Memes: What are you reading? What’s in your mailbox?”